Bert's Log Book now shows he transferred to No 226 OCU Bentwaters (OCU = Operational Conversion Unit) on 28th November 1947 he flew in an Oxford (No. XLG). The next 2 flights were in the same aircraft which appear to have been used for training in twin engine aircraft. This training amounted to only 1 Hour 45 minutes of flying. Following this the Log shows Bert was now flying Meteor III jets. His first Solo flight in a jet aircraft was on the 1st December 1947. 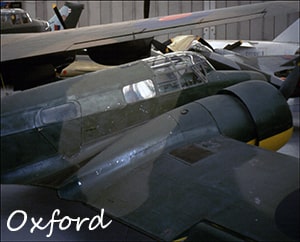 Various training maneuvers were completed, SE Flying is mentioned on several occasions which may relate to Single Engine flying; on one occasion "(engine failure)" is recorded. Was this failure real or a training exercise? Unfortunately it would not be the only engine failure that Bert would encounter. The aircraft flown at Bentwaters are detailed at Appendix 190a.
Bert's training took him to No.41 Squadron at Church Fenton for Instrument training. Here he flew Harvards details of which are detailed at the following Appendix 190b.
Having completed this training Bert completed a further course on Meteors at Bentwaters. 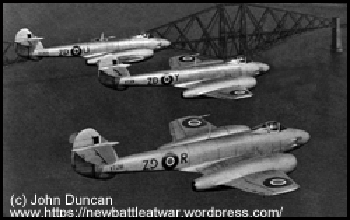