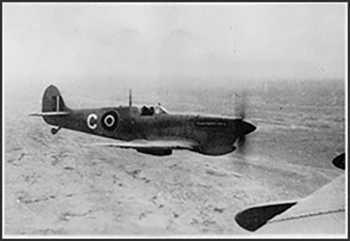 Ten days after arriving at Ismalia and training in Harvards, Bert had his first flight in a Spitfire. The Spitfire was a significant step up in performance compared with the Harvard. The Spitfire has a 1470HP engine and a top speed of 378MPH.

Bert flew several Spitfires during his time at Ismalia, these are listed at Appendix 70.