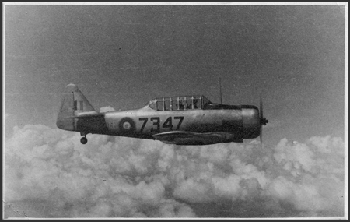 On 20th July 1943 Bert was posted to 22 SPTS Thornhill (SFTS = Service Flying Training School) in Rhodesia where he flew Harvards.
This was a significant step up from the Tiger Moth . The Bi Plane had a 125HP engine and a top speed of 109MPH, the Harvard had a 600HP and a top speed of 212 MPH. Bert flew a number of Harvards, they are listed at Appendix 40.

The photograph aside was copied from Bert's Log Book. The serial number 7347 is not however one listed in the book.

Bert spent 143 hours flying Harvards. In addition to the 27 procedures practiced in the Tiger Moth a further 3 were added:-


28 - Formation Flying
29 - High Dive Bombing
30 - ir - Ground Splash
During his time flying Harvards Bert became a certified Safety Pilot:- "A safety pilot is a certified pilot who scans for other aircraft while another pilot practices instrument approaches or other maneuvers under simulated low visibility conditions while the practicing pilot wears a view limiting device that prevents the pilot from seeing outside the cockpit window."