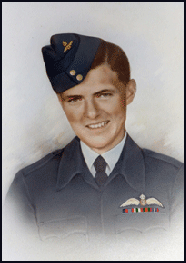 The Log Book starts in 1943 with details of his first flight in a Tiger Moth through to Bert flying jet fighters, the Meteor IV. The last entry in the Log Book is on 5th January 1949 with the entry "Killed", he was 25 years old. His death was as a result of a crash landing caused by his engines failing during a flight in a Meteor jet fighter.

Bert was born on 20th June 1923 and lived in North Queensferry, Fife, Scotland. At the age of 19 he was overseas taking his first flight in a Tiger Moth. The Log Book shows he progressed From Tiger Moths to Harvard's, then Spitfires, Oxfords and finally Meteor jets. With initial training in South Africa, he flew war time missions from Italy with No. 249 Squadron. His final posting was with Squadron 245 at Horsham.
If you would like to contact me direct regarding this website please use the email address shown below. Any information held regarding Bert's flying career including war time missions would be most welcome. 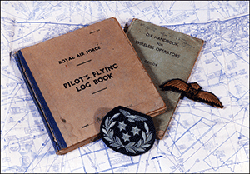 His first recorded flight was on 3rd May 1943 in a Tiger Moth. In just over a week on 11th May 1943 he flew his first solo flight. This initial training is shown to have taken place at No.26 EFTS Guinea Fowl. i.e. No 26 Elementary Flying Training School, Guinea Fowl, Nr Gwelo, Southern Rhodesia. He was based there between 4th April 1943 and 13th July 1943.
During the war he was shot down over enemy territory and taken prisoner of war. He was held in StalagLuft III which was a Luftwaffe run prisoner-of-war camp during World War II that housed captured air force servicemen. Although Squadron records show he was missing in action the exact details of how he was shot down and where he landed his Spitfire are not clear. After the war finished Bert returned to his career with the RAF.
Using the Log Book and sourcing information from the Internet this web site builds up a picture of Bert's flying career.The Log Book does not just show the hours flown but also includes details of the training undertaken in both general flying skills and combat techniques. It also gives details of the missions undertaken during the war. Some of the aircraft photographs displayed on this site have been taken from the Log Book, also displayed are Bert’s RAF badges which are held as are some family documents concerning the period he went missing when a POW. To navigate through this website please use the buttons at the top of the page. These will take you forward and back through the site and also to a copy of the actual Log Book.

PennyPictures.co.uk This site contains photographs taken by Dennis Penny the author of this website.

QueensferryPassage.co.uk This site covers the history of the River Forth Ferries, and career of Captain John Penny.

Some research into the Penny family tree has been carried out and can be viewed using this link."The Penny Family Tree" The period covered is from 1758 - 2018.